Posted in: Meet Our Customers 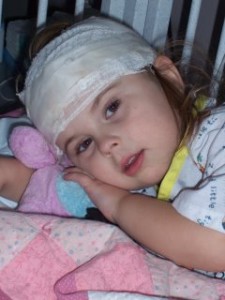 Born July 28, 2004, Grace is the 4th daughter of my best friend Tara and her husband David. She was the second girl to their family and was a charmer from day one. In March of 2006, Lily Veronica came into the world and blessed Tara and David’s lives, child #5. Not long after Lily was born, Grace began to display some abnormal and unruly behaviors. When Tara would describe these outburst and abnormalities, it was difficult to get a true grasp on what was going on. Intuitively, I chalked them up as Grace approaching her 2nd birthday and thought maybe she was going through early states of the “terrible two’s”. But, Tara knew there was something wrong, she felt it in her gut.

Living 2500 miles away from my best friend for the past 14 years has always been a challenge, but words cannot describe the helplessness I felt not being able to really be there for Tara. But, Tara has an amazing husband David, a wonderful family and a deep love for God. Things continued to get worse for Grace and I remember talking with Tara and asking her to describe Grace and she said “It’s as if she is a caged animal trying to get out.” She would sit there and scream, throw tantrums and there was no reasoning with her. Tara began taking her to doctors and doing research on her own – she had to find an answer, and she did.

On October 24, 2006, Tara sent this email to us all,
“David and I have had an unfortunate discovery about Grace. It is clear to us that she has a disease called Rett Syndrome. There is a blood test that will confirm that the gene is in fact present but results won’t be available for another three weeks. If we were not certain that Grace had this disease, we would not be writing to let you all know. Rett Syndrome is a rare neurological disorder that occurs mostly in girls. The prognosis as I’ve been told by her pediatrician is “terrible” and the effects are devastating. It appears to be severe with Grace as new symptoms appear every couple of weeks. There are varying degrees of the disorder and Grace’s appears to be fast moving and aggressive from what I understand.

The website www.rettsyndrome.org didn’t say anything specific about eye gaze but I would say Grace’s gaze is up at the ceiling 30% of the time. And it looks different to me. Sam (Tara‘s oldest son) has always said that Grace was an angel and he thought she sees God when she looks up. Who knows maybe Rett’s girls do see God and that is why she can’t talk-it’s her secret. I also found a website that is dedicated to Rett’s girls and they call them “Silent Angels.” I have come to recognize and understand that some day Grace’s eyes won’t come back down again and she will keep her eyes set on what will ultimately be her final home~Heaven.” 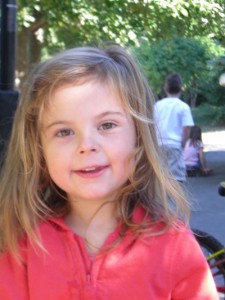 Tara‘s worst fears were validated and Grace was officially diagnosed with Rett Syndrome in November 2006. Since then, Grace has been in and out of hospitals, has had so many drugs pumped into her little body, it’s amazing that she can open her eyes. Grace is now four years old and her mobility is becoming an issue. Ironically, Tara and David know that a wheelchair accessible van is in their future, and I work for a company that makes them.

When I took this job at VMI three years ago, I knew nothing about the mobility industry, and had limited knowledge of disabilities. I wonder if the reason I somehow landed into this industry was not only help the millions of people whose lives are affected by disabilities, but for a very special one, Grace. When Tara talks to me about her struggles with Grace, her family, her life, etc., it’s a similar conversation I have with numbers of families that I talk to all the time. I can now offer Tara some words of advice or stories from families who are in similar situation.

I will be writing a lot about Grace but what I want to get across more than anything is for everyone to get educated. I’m not saying we all need to be well versed in all disabilities, but when you see someone with a disability or a child with a disability, be patient and be kind. Look at Grace, she doesn’t “look” like there is anything wrong with her. But what we don’t see is the havoc this disease is running on Grace’s brain, stomach, breathing and muscles. The worst part about it is that she can’t speak, she can’t tell Tara and David what hurts, she can only scream and shake violently. When there is a fundraiser, fun run, etc. in your community for MS or Cerebral Palsy, or any other disease, take part. Go and spend the $20 it takes to get out and participate in a 3K walk. Mostly every dollar of those fees goes to the organization that it is sponsoring. Without donations, we will never find a cure for the thousands of diseases that are affecting our loved ones.