Imagine being 14 years old away at a summer camp, and the next thing you remember is waking up in a hospital without your limbs.

Imagine making it to the ranks of playing college football; 6% of high school seniors (1 in 16) will play football in college.   While on summer break, you go boating with friends and come back from the lake in an ambulance…with a broken back.

Imagine being 19 years old, heading off to a party.  You are looking forward to hanging out with your friends, flirting with girls, etc.  Instead, a fight breaks out and you get pushed off a deck by a drunk guy, and are rendered paralyzed. 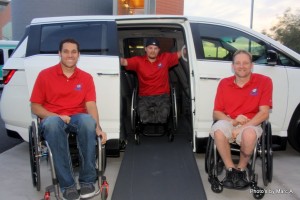 All of these stories are, unfortunately, true.  Nick Springer was 14 when he contracted bacterial meningococcal meningitis at summer camp.  The disease left Nick in a drug induced coma for two months.  When he woke up, he realized that his life had been spared, but that he had lost all four limbs to partial amputations.

Joe Delagrave was sitting in a boat on the Mississippi River when the driver of the boat tried to turn the boat around and struck ground.  Joe flew off his seat and collided with the front interior of the boat and broke his neck.

Scott Hogsett grew up playing football and baseball.  He was a pitcher on a community college’s baseball team when he was injured during a party.  Another man pushed Scott off a patio deck during an argument.  Hogsett fell and broke his neck. 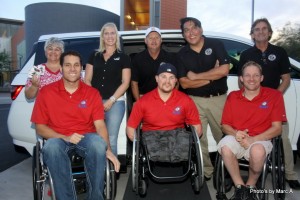 Nick, Joe and Scott are three members of the USA Wheelchair Rugby team who will be competing in London at the Paralympics.  None of these guys grew up hoping to be in the Paralympics.  But, after their accidents, they all felt that drive to pick themselves up, dust off, and get back into competitive sports.  Quad rugby could be the most violent thing I have ever witnessed.   It is also the fastest growing wheelchair sport in the world.

Smashing Stereotypes One Hit at a Time is the main message of the players and their sport. Quad rugby is a tough, give-no-quarter game. Our players’ lives – their successes and trials on and off the court – are a continuous example of smashing stereotypes. The sport is about ability and competitive fire. It is testament to the spirit of our great athletes, their humanity, and the intensity of our game.

Friday, August 17th, I had the pleasure of participating in a celebration for Nick, Joe and Scott who practice in Arizona at the Virginia C. Piper Sports and Fitness Center for People with Disabilities.  It was their official send off party before the left for London.  We are rooting for the guys, and all the athletes who will be competing in London from August 29-Sept 9.