Update from the Davert family

Posted in: Meet Our Customers

In May, the Davert family was awarded a VMI van through the NMEDA Local Hero contest.  Below is an email that Missy sent out updating us on their life with their new van:

“Oh, gosh, we just love our White Lightening!  Yes, I am sharing her with Ken!  We have been all over in it!  We took it to Cleveland a few weeks ago, so that Austin could go to an airshow (he is friends with one of the aerobatic pilots).  We had a great time and the trip was so much nicer with the new car!  Austin and I played video games and watched movies…it really made the ride fly by.  And as we were about to drive across the Michigan border, Ken and I realized that we have never before driven out of state together (except for one time we took a ride over the Canadian bridge!). It is so nice to have transportation we can rely on!

We have also been to Ann Arbor a few times for medical appointments, to Birch Run for a shopping adventure, and Frankenmuth for shopping and fun!  I will try to send you some pictures as we get them.  I forgot to get a picture of the van in Cleveland!  But, I’ll try to remember to take a few the next time we go somewhere fun!

It is still getting lots of attention and press!  I can’t begin to tell you how many little demonstrations we have given to curious people.  And we are still getting tons of congratulations whenever we go out in public.  I truly believe it is the most recognized vehicle in town!

Fox News 2 in Detroit is doing a story on our family and they have taken lots of video of the van.  They came up yesterday and took pictures of us picking up the kids at school and they followed us home and got video of us pulling in our driveway.  They even put a go pro camera inside the car while we were driving!  We took the lightening for a car wash yesterday morning, so it would look all spiffy for the cameras!  🙂

I’m attaching a photo of the Lightening parked in Downtown Bay City.  I took it to the fabric store where I participate in a quilting group.  Coincidently, this is the actual corner where Ken and I first met! 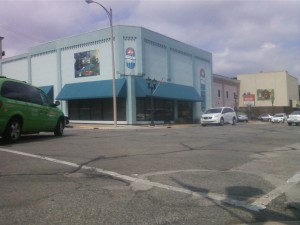 The other picture is Michaela sitting in the front seat!  She was never able to sit up front before!  And, as you can see by the picture, she took command of the radio right away! 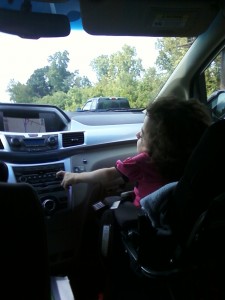