(PHOENIX, Ariz.) –Vantage Mobility International, LLC (VMI) recently donated a Dodge Grand Caravan with a VMI Summit conversion to Heather Grossman of Heather’s Haven of Hope with help from Phoenix International Raceway (PIR). The minivan – adapted for wheelchair accessibility – gives Grossman back the mobility and freedom that were taken away when her previous wheelchair van was totaled in an accident.

12 years ago, Heather Grossman tragically saw her world collapse as men hired by her ex-husband attempted to shoot and kill her. Clinically dead on the scene, Grossman was brought back to life by a paramedic only to realize that she was paralyzed from the neck down.  Shortly after she was shot, her then-husband began to physically and mentally abuse Heather and isolated her from her parents … this inexorable punishment went on for four years. 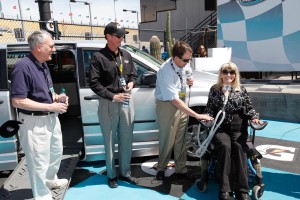 Rising from the ashes of abuse, setbacks and financial hardship, Grossman established a charitable foundation – Heather’s Haven of Hope – an organization that helps raise awareness about domestic violence and allows her to mentor newly-injured spinal cord patients. Today, the mother-of-three also serves as a consultant to the Justice Department’s Office for Victims of Crime in Washington, D.C. and speaks at their conferences and seminars.

When Grossman faced another setback in 2009 – an accident that totaled her wheelchair-accessible van – she struggled to become mobile again with a mountain of medical bills and the need for full-time nursing. United States Senator Jon Kyl of Arizona heard of Grossman’s story and made VMI and PIR aware of the challenges she had faced. VMI, with assistance from PIR, stepped up and helped make Grossman mobile once again. 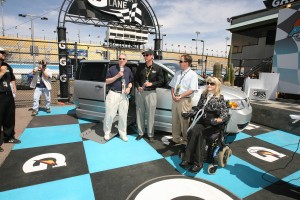 The new Dodge Grand Caravan was officially donated to Grossman in Victory Lane at Phoenix International Raceway on April 10 as part of NASCAR’s SUBWAY Fresh Fit 500™ at PIR. The floor of the van was lowered 11 inches by VMI to accommodate extra headroom needed for Heather and her wheelchair, and an automatic ramp can now be deployed at the push of a button for easy access in and out of the vehicle. With ample wheelchair maneuverability room inside the van, Heather is a comfortable passenger as her caregivers can transport her around the Phoenix area and across the country.

“I had the pleasure of meeting Heather three years ago at the Ms. Wheelchair Arizona pageant and was instantly touched by her tenacity and positive outlook on life,” said Doug Eaton, President and CEO for VMI. “When I heard that Heather had been without transportation for 11 months, I knew we had to do something for her, because she does so much for the community as a mentor for other abuse victims. Donating the Summit fold-out ramp conversion on the Dodge Grand Caravan will thankfully get Heather back on the road doing what she loves and what our community needs.”

Grossman, overjoyed by the donation, said: “I feel like I’ve been let out of jail. I can now go and visit my son at Pepperdine University in California. I can go back to church and back to the hospitals to mentor other abuse victims.”

ABOUT VANTAGE MOBILITY, INTERNATIONAL:
Founded in 1987, VMI is a manufacturer and distributor of the most reliable, highest quality and most easily accessible transportation in the world. Their full line of products include domestic and import minivan conversions, full-size van conversions, platform lifts, scooter and wheelchair lifts and transfer seats. VMI’s mobility products enable consumers to travel with comfort, convenience and peace of mind.