VMI Launches the New Summit Ramp on the Chrysler/Dodge Minivans

VMI has announced it has begun sales of their Summit fold-out ramp on the 2008-2009 Chrysler/Dodge minivans.  VMI has passed all state and federal requirements for safety and emissions and has been producing the new Summit conversion since April, 2009.  VMI has been modifying the Chrysler/Dodge line of minivans since 1987 and it has been the mainstay of their product line. 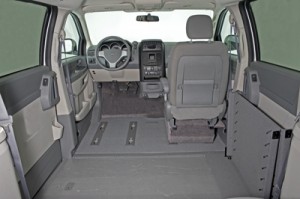 The biggest obstacle was the passenger side sliding door handle, which sits lower in the vehicle than in previous Chrysler/Dodge minivans.  By shortening the ramp 6 inches, VMI now offers unobstructed access to the passenger side interior sliding door handle.  This shorter ramp also allows greater maneuverability in tight parking spaces, while also maintaining a ramp angle under 10°.  VMI also moved the deploy/stow chain to the outside of the ramp side-rail to prevent possible interference with wheelchairs and providing more usable ramp area.

“The Summit has a long and rich history as a reliable fold-out ramp system,” said Doug Eaton, President and CEO of VMI.  “This new version, available on the Chrysler/Dodge platform, is well engineered, and may be our best effort yet.  The combination of the short ramp length, access to the door handle and generous interior maneuvering room differentiates the Summit conversion in this ultra competitive sector.” 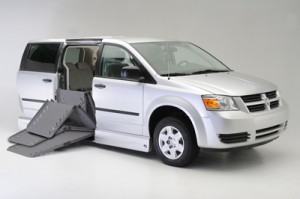 Other standard features on the Chrysler/Dodge with the VMI Summit conversion include a fully powered fold-out ramp that has a smooth and precise operation.  The PowerKneel™ system automatically and gently lowers the vehicle to decrease ramp incline and increase accessibility which is just under 10°.

VMI is currently producing 2008 and 2009 models and accepts new and used chassis for conversion.  The first 2008-2009 Chrysler/Dodge with the VMI Summit conversions began shipping with limited availability to mobility dealers nationwide on April 27th, 2009.