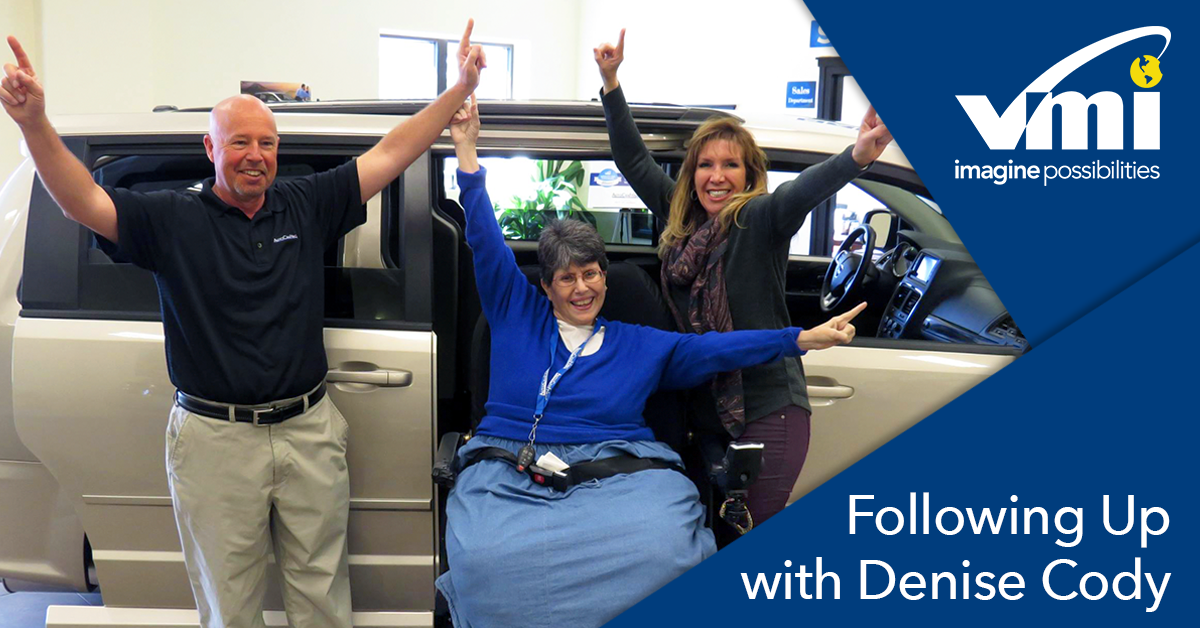 Cody’s car is old and has many miles on it, but that’s not what keeps her from driving. She’s completely dependent on her wheelchair to get around because of a progressive form of muscular dystrophy. The car, she said, “requires transferring from a wheelchair into a driver’s seat and then driving with my feet,”– something her disease makes impossible.

Everything changed, however, this past December when Vantage Mobility (VMI) awarded Cody a free wheelchair van conversion. Cody was selected out of almost 10,000 contestants during a promotional offer VMI launched in July of 2015.

For the past two years, Denise Cody has stared out the window of her upstate New York home at a decade-old car she hasn’t been able to drive. On a beautiful summer day when other people are out strolling Central Park or walking through the city, she’s at the mercy of friends and family who may or may not have time to pick her up and take her for a spin.

The Difficulties of Driving When You’re Disabled

Now she’ll have the independence that comes with the ability to drive wherever, whenever.  The conversion comes with a side-entry ramp and removable driver’s seat, which will allow Cody to drive from her own wheelchair. She will accelerate, brake and steer her van entirely via hand controls — at least after she completes her hand-driving certification course.

This doesn’t faze her excitement, though. “It’s really, really easy,” she said.

For Cody, winning the conversion was a breath of fresh air in an otherwise terribly, unfortunate and trying 12 months. “They called me in December and … told me over the phone that I had won, and I immediately started crying. 2015 was an extremely hard year,” she said. “My mom passed away. Three days after my mom passed away, I broke my kneecap in three places and my fibula bone. It was a really, really, really bad year.”

Winning the contest was the year’s major redeemer, and her finished product —a 2015 Dodge Caravan SXT that she purchased especially for the conversion —comes just in time for her birthday this month. Her celebration plans are nothing short of adventurous and exciting.

The Benefits of Wheelchair Vans

“I have full intentions of going and doing what I have been wanting to do forever, and (with the wheelchair van) I’ll have the ability to do it,” she said. “I’ll be driving probably across [the] country to see my family,” whom she mentions are spread throughout California, North Dakota, Washington State and Arizona.

Beyond her new traveling abilities, she said her new wheelchair van could also open doors to new employment opportunities.

“I have a college degree; there (are) many things that I know how to do,” she said, “but transportation is an important issue when you want to have a job … gotta be able to get there.”

While the best gift of all would have been celebrating her win with her mother by her side, Cody said she is still overwhelmed with happiness and gratitude.

“It’s life changing,” she said. “I have a vehicle that is bought and paid for and it (sat) there because I (couldn’t) drive it. Now… I don’t have to wait for somebody to come to pick me up…I can go get in my vehicle and drive myself to a lake. I can do what I want when I want because I no longer have (any) restrictions.”

Between the tears of happiness and long road trip plans that await her, Cody says she still has a hard time believing it’s all true.

“It’s all brand new. It’s all overwhelming. You know, pinch me! Is this real? It is real.”