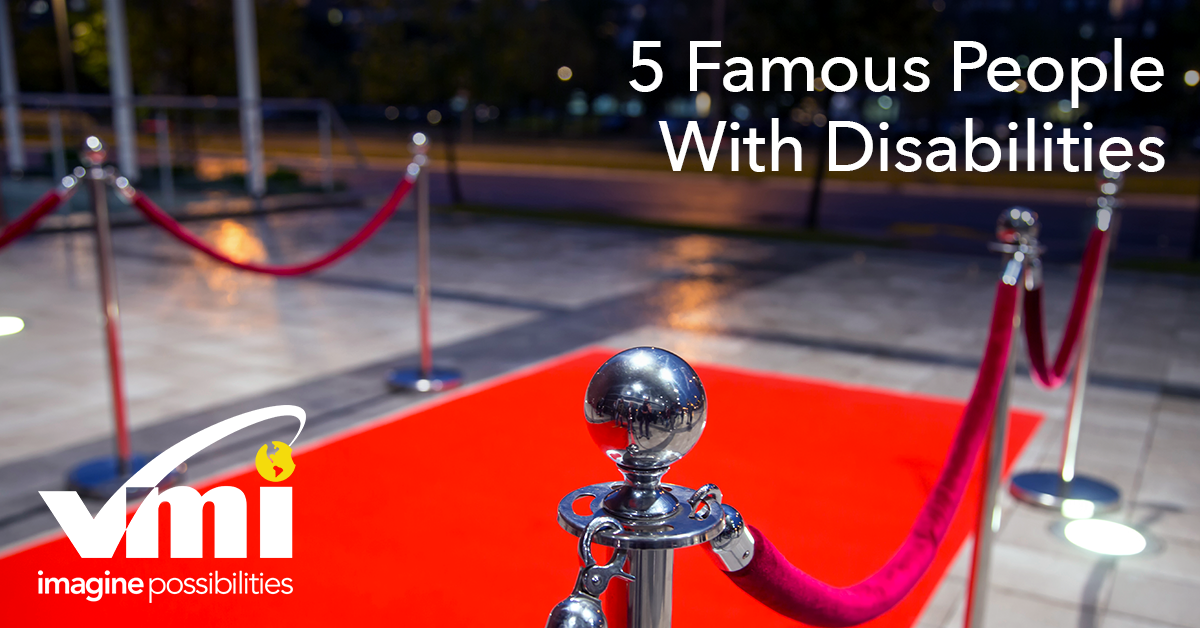 From artists and athletes to world leaders and motivational speakers, the world is graced by talented people, and some of them happen to have disabilities. These success stories show that no hurdle is too high to overcome. Read on for five famous people with disabilities that accomplished great feats in their lifetime.

“Men are not prisoners of fate, but prisoners of their own minds.” — Franklin Delano Roosevelt, 33rd President of the United States

First on the list is Franklin Delano Roosevelt, or FDR for short. The 33rd U.S. president was an incredibly popular and charismatic person. He lost the use of his legs in 1921 and won his first of four elections 1933, making him the longest serving president in the history of the United States. He was a beacon of hope at the end of the Great Depression, setting up the New Deal and social security policies. He also established a nationwide minimum wage. Not to mention he led the U.S. through World War II, joining with Winston Churchill and Joseph Stalin to create the Allied Powers.  As if this wasn’t enough, he and his team were instrumental in the inception of the United Nations. Though he didn’t live to see it rise to power, he was the first to coin the term United Nations as a successor for the League of Nations.

“Feet, what do I need you for when I have wings to fly?” — Frida Kahlo de Rivera, Iconic Mexican Artist

Nothing could stop Frida Kahlo from emerging as one of the more recognizable painters in history. She was a Mexican painter well-known for her recognizable self-portraits. Inspired by what she saw around her, her portraits explored identity, gender, class, and race. Her art wasn’t always in the picture — she was left disabled by polio as a child. At 18, she was later in a traffic accident that caused pain for the rest of her life and put her in a wheelchair. Prior to the accident, she was headed for medical school. She discovered art throughout her long recovery.

Today, her portraits are studied in art history classes all over the world for their strong autobiographical themes as well as her mixed elements of fantasy and realism. Many of her most prominent self-portraits feature her wheelchair.  She’s the first Mexican artist to be displayed in the Louvre.

“I’m not in a wheelchair. I ride one.” — Aaron ‘Wheelz’ Fotheringham, Extreme Wheelchair Athlete

Made famous by his double backflip on the Nitro Circus tour, Aaron “Wheelz” Fotheringham is an action sports hero in a wheelchair. The extreme wheelchair athlete has spina bifida, which paralyzes the lower limbs. Though he started with crutches at first, he has been using a wheelchair since he was 8 years old. He would watch his brother ride his BMX at the skate park, and one day his brother told him that he should try riding his chair in the park. Aaron later noted that “I did, and I was hooked.”

Today, he travels with a band of BMX bikers and skaters, under the direction of Travis Pastrana. He uses a performance wheelchair designed by Box Wheelchairs. He performs wild ramp stunts in his chair alongside other professional action athletes.

Jean Driscoll was born with spina bifida and began using a wheelchair in high school. This is when she was first exposed to wheelchair sports. She was recruited to play wheelchair basketball at the University of Illinois, but found her true calling in wheelchair track and field.

Today, she’s known for winning the women’s wheelchair division of the Boston Marathon eight times, more than any other female athlete in any division. She’s also participated in four Summer Paralympic Games: she’s the proud owner of five gold medals, three silver medals, and four bronze medals in events ranging from 200 meters to the marathon.

“I encourage you to accept that you may not be able to see a path right now, but that doesn’t mean it’s not there.”  — Nick Vujicic, Motivational Speaker

Nicholas Vujicic is a philanthropist, evangelist, and motivational speaker. He was born with tetra-amelia syndrome, which means he was born without limbs. He’s one of seven known survivors of the syndrome. He began motivational speaking when he was 19 years old. In 2005, he founded an international non-profit organization and ministry called “Life Without Limbs.” Today, he’s a bestselling author of titles like Life Without Limits: Inspiration for a Ridiculously Good Life and Stand Strong. When he’s not traveling the world giving speeches and inspiring action, he spends time with his wife and family in southern California.

Inspiration and motivation can come from anywhere, even quotes and sayings. The wisdom from these icons can push people with disabilities to overcome even everyday obstacles.