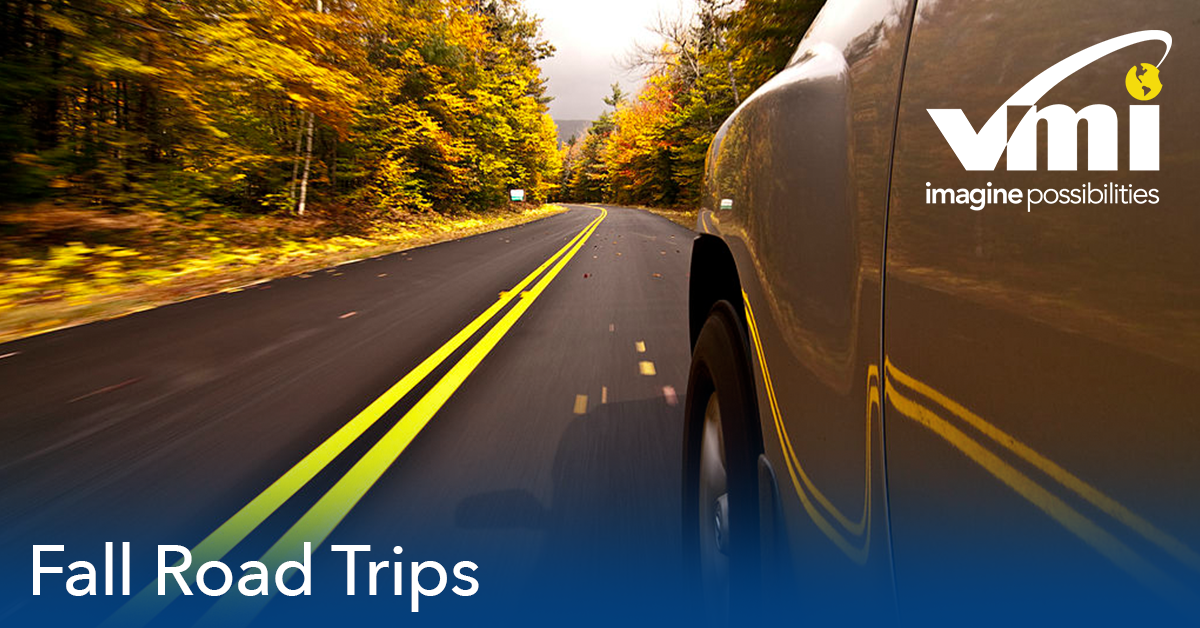 Arizona has some of the most beautiful, well-known scenery in the country. Whether it’s Historic Route 66, the red rocks in Sedona, the Grand Canyon up north, or Antelope Canyon in Page, where the world’s most expensive photo ever sold was taken (Phantom, sold for $6.5 million) — the number of breathtaking landscapes could probably suffocate a person.

The fall season makes Arizona even more desirable and pleasing with its snow-crested mountains, browning leaves and pleasant weather. Perhaps no one knows this better than the folks at Arizona Highways, who spend each day writing and posting images online about the beauty that is the Grand Canyon State.

Noah Austin is the associate editor at Arizona Highways Magazine, and is in charge of coordinating scenic drives for the publication’s readers. We asked him a few questions about the best road trip practices and to coordinate a few road trips for VMI readers, too. In the comfort of a wheelchair van, why not take a roadtrip with loved ones in the great southwest?

VMI: What makes a road trip great?
NA: For me, a road trip isn’t just about great scenery. It’s also about history and culture along the way. For example, Arizona has one of the country’s longest stretches of Historic Route 66, and parts of that road — the parts you can still drive, anyway — aren’t particularly “scenic,” but you’re driving on a route that people have been using to get from the Midwest to the West Coast since the 1920s. There’s one section, between Kingman and Oatman, that eventually was bypassed because it was too steep for the car engines of the 1920s, which were gravity-fed rather than using fuel pumps. People would actually drive their cars backward up the hill to get around this problem. So I find little bits of history like that fascinating, although a scenic landscape along the road is wonderful as well.

VMI: When and where was your favorite road trip? Why is it your favorite?
NA: My favorite road trip actually happened earlier this summer. I had to go to the North Rim of the Grand Canyon, a place I’d never been, for an assignment in a future issue of the magazine. The North Rim is so remote — from Flagstaff, it’s an extra 130 miles to reach the North Rim compared with the South Rim. It’s almost like being in another state; it’s about 8,500 feet above sea level, and nighttime temperatures get down into the 40s, even in July and August. The scenery on the way there is spectacular — Navajo Bridge over Marble Canyon, the Vermilion Cliffs, the spruce and fir forest on the way to the rim of the Canyon, a herd of bison that really shouldn’t be there but are there anyway, etc. I wish I could have stayed for longer. I spent about 15 hours in the car over two days, and I didn’t even listen to any music. The scenery was that spectacular. I’m already trying to figure out when I can do it again.

VMI: How far in advance do you plan a road trip?
NA: I usually plan a road trip about a month in advance. Sometimes I’ll print out an itinerary, so I can make sure I stay on schedule if I have dinner reservations somewhere. Often I’ll map the route in Google Maps so I have an idea of how long each leg of the trip will take. Arizona is a big state, and sometimes it can be hard to picture how long it’s going to take to get somewhere, so online tools really help. When possible, I try to map a “loop” route so I’m not going over the same terrain twice, but this isn’t always an option.

VMI: What are your must-have road trip snacks?
NA: Beef jerky. Provided it’s not too greasy, it’s a perfect thing to keep you going on the road. There’s a place in Quartzsite, out in Western Arizona, called Really Good Beef Jerky, and it lives up to its name. I try to stop there anytime I’m in the area.

NA:
Route 66 (Kingman to Topock)
This is the Route 66 section I mentioned earlier. This is the original alignment of Route 66 before it was bypassed due to the steepness of Sitgreaves Pass, but today’s cars have no problem with it. It goes through Oatman, an old mining town where burros descended from prospectors’ animals roam the streets. It ends near the Old Trails Bridge over the Colorado River.

State Route 89A (Oak Creek Canyon)
This is another route with a lot of hills, but it shouldn’t present any trouble. Especially in fall, when the oaks and cottonwoods in the canyon start to change color, this is a spectacular drive. Definitely stop at the vista at the top of the canyon. Important to note: It is wheelchair accessible.

Saguaro National Park East (near Tucson)
This is an easy, flat loop through the saguaros and other desert plant life. [You] might even see some javelinas. There are several overlooks and picnic areas as well.

Kingman to Pearce Ferry (Lake Mead)
Despite the photo [in the link], this one doesn’t actually go to Lake Mead anymore — the water has receded too much, unfortunately. But there’s some history to it, and it passes through a stunning forest of Joshua trees, maybe the most unique plant species in the Southwest.

Volcanoes and Ruins Loop (near Flagstaff)
This drive passes through Sunset Crater Volcano and Wupatki national monuments. You have to pay to enter the monuments, but there are wheelchair-accessible areas there, and the drive itself offers some great views, particularly when the aspens in the area are changing color in September and October.

Catalina Highway (near Tucson)
This one goes to Summerhaven near the top of Mount Lemmon. It can be a 30- or 40-degree temperature difference from the bottom to the top. Again, some nice fall color along the way, though Summerhaven is still recovering from a 2003 wildfire.

If you and your family decide to take one of these recommended trips, tag VMI! We’d love to see the fun you’re having on the road in your wheelchair van.